Anna Hakobyan Spends Her Night At the Border 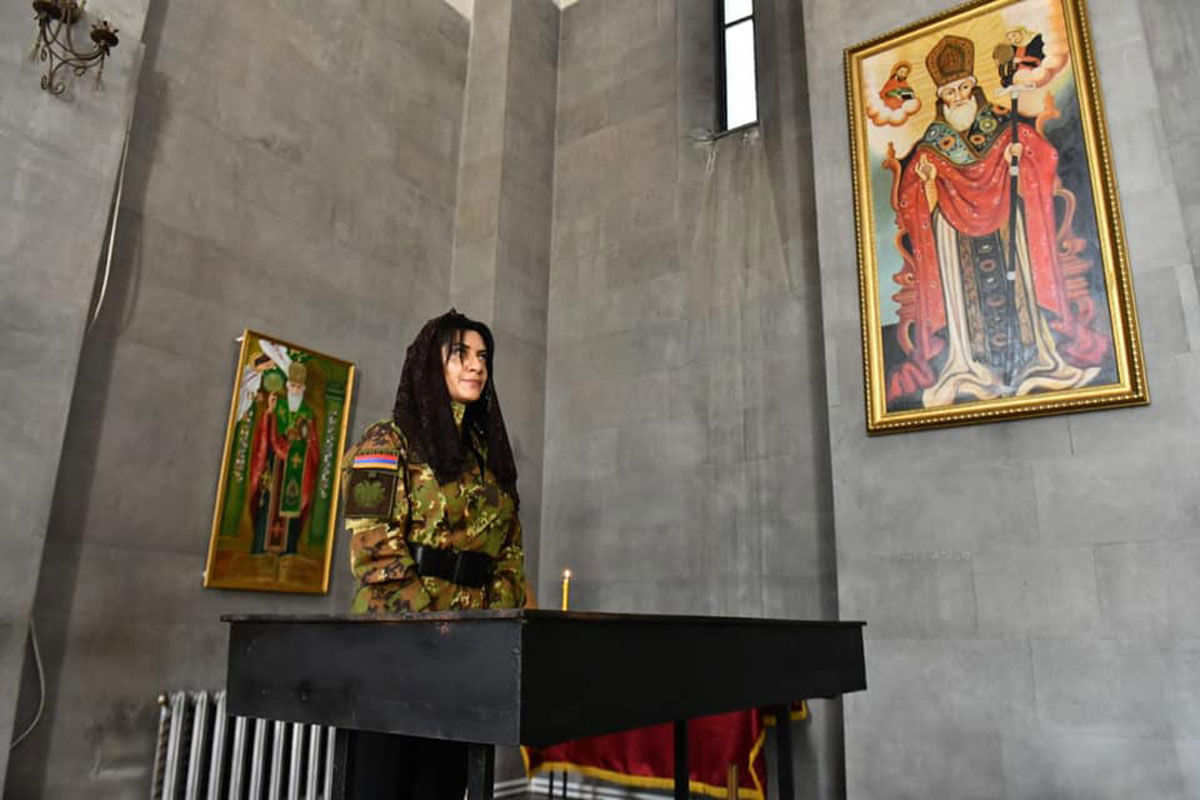 Anna Hakobyan at the Borders

Anna Hakobyan, wife of Nicol Pashinyan, Prime Minister of Armenia, spends the night in Aygepar, Tavush, one of the border villages in Armenia that has been under attack by Azerbaijan.
Armenian men have always defended their families and towns in the best way they can, while Armenian women who stayed behind, didn’t just stop and mourn. After going through atrocities at the hands of the Ottoman Empire, right in the middle of the Armenian Genocide, Armenian women stood up and took arms, they became Fedayis, they built schools, raised new generations of defenders and tigers.
Armenian women have always been heroes, they are made of steel, from the beginning of time, through history, during harsh times, and even right after the Genocide, Armenian women had their presence in The First Republic of Armenia.
Berjouhie Bardizbanian was a role model, but after 100 years her genes still linger in her Great-granddaughter Jeanne Barseghian. IN 1920 Diana Abkar was appointed consul general of the Republic of Armenia in Japan and became the first Armenian woman diplomat. Let not our softness deceive you

Our misfortunes have awakened the strong divas in us, the same goddesses that made the Armenian family, when our nation first existed, they are engraved in our characters. We may be soft on the outside but our will makes us strong.
As Anna Hakobyan spent her night with two brave Armenian women, who have decided to stay even when our borders are being attacked, it shows how our women are attached to their lands and soldiers.
Last week when the attacks first started, Anna Hakobyan, wearing a camouflage top and some flowers in her hands, send a soft message to the women on the other side of the border, a call to stop the violence and save the lives of sons, brothers, and husbands. The lives of those who are only victims of the deceiving policy of their leaders.
But let not our peace offering deceive you because we are ready to defend what was ours for centuries. Defending our lands where our civilization was born and spread to the world. I spent the night in Aygepar

Mrs. Pashinyan wrote on her Facebook page:
“Yesterday I spent the night in Aygepar, at the Kizokhyan family.
The photo shows the housewife, Gohar, pouring coffee for her in-law, Mrs. Vardush.
Mrs. Gohar’s daughter married Mrs. Vardush’s son. The latter is a soldier, he was wounded a few days ago and is now in Muratsan hospital. The woman, Gohar’s daughter, is also in Yerevan, who, as her mother-in-law says, was sent to see her husband with her own eyes, to find peace.
These two women were always together during Azeri aggression. Mrs. Vardush spends the night at her in law’s house because her house is in a much more dangerous position.
Before going to bed, the three of us talked for a very long time, from the bitter life to the jokes, for example, that in the hottest moment of the mine explosions, one of them, sheltered under the bed, offered the other to “take a picture and put it on the site.”
I thank Mrs. Gohar for opening your doors to us and providing us with accommodation and so much care. It is always a big mess for the housewife to take in guests.
The night was peaceful in Aygepar. They say several shots were fired, but I slept so soundly and I did not hear them. We are ready, the choice is yours.

A call to stop the military operations and move towards peace

Last week Mrs. Anna Hakobyan had called for peace, as she released a statement:
A call to stop the military operations and move towards peace
Since yesterday the situation on the Armenia – Azerbaijani border has been tense. Fights broke out between the Armenian and Azerbaijani armed forces.
According to the official information the Azerbaijani side gave 4 victims during few hours.
As an Ambassador of the WOMEN FOR PEACE CAMPAIGN, I call upon Azerbaijani women and mothers to exhort the military-political leadership of their country to stop the hostilities, not to endanger the lives of the children of the Azerbaijani and Armenian people.
Women, mothers, and sisters should question their military-political leadership what have they gained at the cost of the loss of their loved ones, at the cost of their personal tragedy. And what prevents discussion of the problems through negotiations in a peaceful way with the leadership of the opposite sides?
Especially now, when the world is struggling against the Coronavirus, Heads of states should focus their efforts on protecting the health of their people and on fighting against the common enemy-the pandemic to help people return to their normal lives.
Following the UN Secretary – General’s appeal to declare a global ceasefire is the best move that country leaders can do for their people.
War should always be avoided. There is always an alternative.
#Womenforpeace
#Կանայքհանունխաղաղության
#Womenareinspiring
#Womensmotivation
#Womenempowerment